I do have a stagecoach but don't have any really suitable highwaymen and anyway, I didn't have a good back story so I time shifted back to the early medieval period and got out my Elastolin figures. Needing two good guys disguised as innocent passengers, I went with the bare-headed Prince Valiant & Sir Gawain. 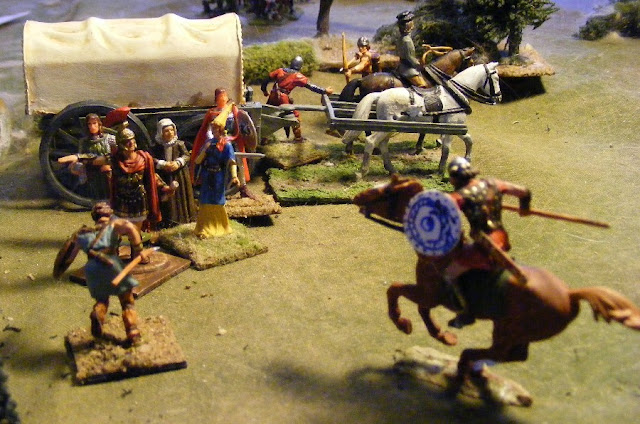 Word reached Count Hubert's court that the Red Knight and a band of  ruffians were stopping travelers on the road to Belmont.  When ever a patrol of the Count's men  came down the road, the robbers melted away into the forest. Val approached Gawain  with a proposal. The next day, as an envoy from Rome and the Lady Alison climb into the carriage, two strangers muffled in cloaks climb in behind them.

Shortly after the carriage left the way station at Mount Uniake and entered the woods,  a fallen log blocked the road. As the driver slowed, a cry rang out, "STAND and DELIVER!",  and an archer with draw bow stepped from the shadows.  In accordance with his instructions, the guard put his bow aside and stepped down. The passengers stepped out as the Red Knight and a ruffian swiftly moved out on the other side and began pilfering the envoy and the lady Allison. Seizing the moment, Gawaine threw off his cloak, drew his sword and lunged at the ruffian. Val started forward but his cloak caught, taking a moment to clear but he was on the Red Kight before he could escape.

The guard now drew his sword and rushed on the archer who, startled, shot wide then drew his own sword. A clash of blades rang through the forest and the issue stood in doubt but at last the guard felled his man while Prince Valiant pulled the Red Knight from his horse and put an ended to his thieving ways. The last ruffian turned and fled for the woods. Gawain started in pursuit but Val  grabbed his arm saying "Let him go, tomorrow is New Year's Eve and we have fought enough battles for one year."
Posted by Ross Mac rmacfa@gmail.com at 3:33 PM