This game was played in Maryland between Rob Dean's 1/72nd Egyptians vs Norman Dean's 1/72nd Hittites using Warhammer Ancient battles with myself as GameMaster. 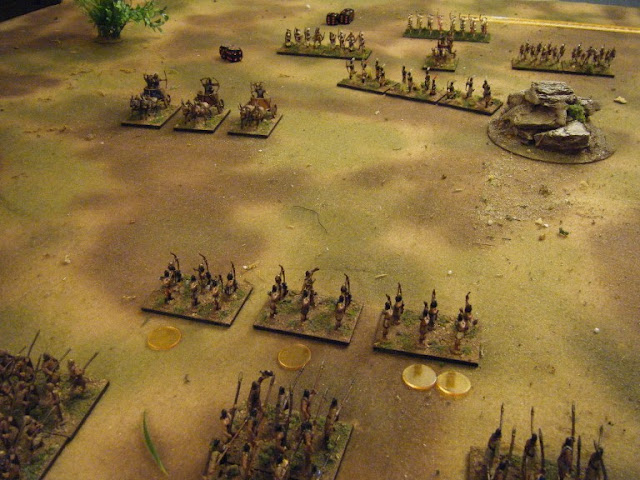 This was the first battle between Rob Dean's fledgling Egyptian army and his son Norman's gathering Hittite horde. Norman was the defender and decided to lure the enemy forward by placing his 3 spear units out in the open screened by skirmishing archers. His chariot units and a small auxilliary warband were hidden in a gully that ran at right angle to his line on the left. Rob deployed with a small unit of chariots on either flank supported by skirmishing Nubian archers with massed archers, sea people and some slingers in reserve.

All was well as the Egyptians marched forward until the hidden warband became inpatient and surged forward without orders. Norman decided to send his 1st Chariot unit forward since his cover was blown. Faced with a rattling horde of chariots appearing out of no where, the Egyptian chariots chose to evade. Unfortunately this took them past the Hittite archers who shot one down. Under the rules, there were now too few chariots to rally. (oops, bigger units next time.) The small warband chased off the Nubians but came to grief when it came up against some sea people mercenaries moving forward from reserve.

The next phase of battle now involved an attack by more Egyptian chariots supported by bowfire against the Hittite spearmen. Under the shower of arrows, the spearmen faltered and broke but rallied before the chariots could exploit the opening.

While the rallied spearmen advanced all along the line, the Hittite chariots chased down the enemy general. The extra crew and long spears proved crucial and the remnants of the Egyptian force fell back leaving the desert to the Hittites.
Posted by Ross Mac rmacfa@gmail.com at 7:11 AM

Email ThisBlogThis!Share to TwitterShare to FacebookShare to Pinterest
Labels: ancients