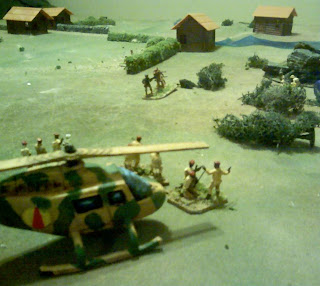 Since I still haven't built a VSF Balloon corps, I had to resort to actual helicopters. I was planning to use Cold War Commander but thanks to http://wargamingmiscellany.blogspot.com/ I decided to play using Joe Morschauser's modern rules, straight up.  I couldn't think of why a Roscian patrol would have been inserted into Naryatria so the latter became the aggressor. I put an Local Defense Force (LDF) stand in each village and placed a roving patrol randomly. I then divided the table into 6 areas and rolled to see in which one the 2 stand Naryatrian patrol from the Rhino Regiment was hidden and assumed that their position had been betrayed by a flock of crows or what have you. Once fire was opened, each side diced each turn with a score equal to or less than the turn number indicating that their helicopters had shown up.
The LDF closed in piecemeal and the Rhinos opened fire opened fire with deadly effect. As more LDF closed in, a Rhino went down and the remaining stand pulled back into cover breaking the line of fire. A stalemate ensued until 2 helo's full of Lion Brigade Commandos arrived to cover the remaining Rhinos as they headed for the evac helo. As they boarded,  a squadron of Roscian helicopters flew in low and debouched 6 stands of Newpore Lancers.  The Lions opened up while the evac helo loaded but the return fire from the Lancers cut them to pieces and only 2 stands made it back aboard their rides.
The rules worked like I remembered, fast & bloody.  If I were to play the scenario again, I would double the number of stands.
Posted by Ross Mac rmacfa@gmail.com at 7:17 AM

Email ThisBlogThis!Share to TwitterShare to FacebookShare to Pinterest
Labels: modern