This game was played solo using 40mm 19thC armies and Hearts of Tin.

I'm still gathering forces and working on the background for my Red vs Blue campaign so technically haven't started yet but it seems to be developing a storyline all by itself. After the surprise appearance of Pirates as Blue allies in #11, an attack on a fortified city suggested a punitive expedition by Red, so instead of trenches and breaches its a surprise attack from the jungle at 1st light: the escalade of Freeport. The pirates had 1 unit spread out along the wall in detached companies with a heavy battery in the stone tower guarding the log boom blocking the river. A 2nd unit was asleep in town as well as the Grenadiers of San Carlos who had volunteered their services to defend the town. I counted the pirates as Veteran Militia. Apparently there are some religious issues as 2 armed Franciscans were serving as aides to Captain Mulrooney, the Pirate chief.

Red had 2 storming parties, one with 3 ladder parties, all grenadiers, and a company of rifles led by Brigadier Macfarlane, the other with 2 companies of grenadiers, a company of rifles and an Engineer with petard, all under the command of Brigadier Grey. The back up force under General Turner comprised the Rocket Troop, FTC Horse Artillery and 2 battalions of foot as well as the gunboat FTCS Recycle with a heavy mortar. 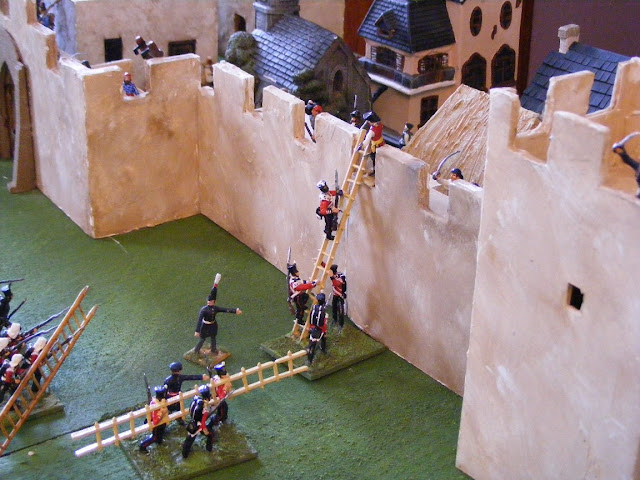 Grey's party managed to creep within 6" of the gate before the alarm was sounded but the laddermen, no doubt slowed by their burden, were not even 1/2 way from the edge of the jungle. As the alarm went up the rocket troop galloped forward and opened fire as the Recycle steamed into view. In short order, the surprisingly accurate rocket and mortar fire had silenced the Tower Battery (accurate if not counting a rogue rocket that just missed the Tigers!). Meanwhile Gray's grenadiers charged forward and engaged in a desperate close range firefight with the defenders while the Engineer struggled with his charges (tied melee) but at last the fuse was lit, the door blown open and the forlorn hope entered. Now where were the relief's? 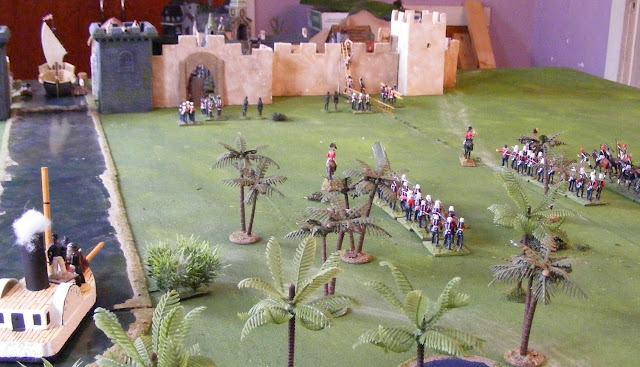 There had been some confusion in the jungle and the Tigers were not even 1/2 way there so Grey sent 1 company to seize the rampart above the gate while the other held the door itself. Over on the wall, the 3 ladders went up but resistance was surprisingly fierce and 2 of the 3 parties were thrown back. The 3rd company was undaunted and clung to a narrow foothold. 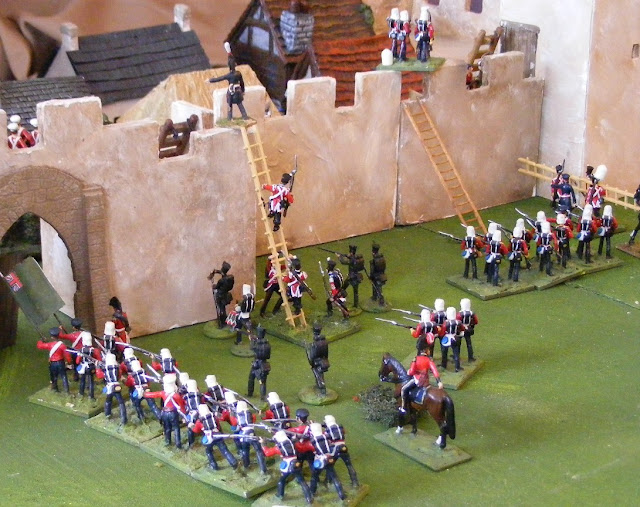 The Buffs were quickly at hand and started feeding men up the ladders into the fight under a withering flanking fire. Macfarlane spotted an empty stretch of rampart and led the closest ladder party to it to effect a lodging, eventually reinforced by riflemen and some Buffs. Inside, fierce and bloody fighting reigned as the pirates and San Carlos Grenadiers struggled to evict the enemy but eventually, despite local, temporary victories, their casualties were too high and they fled back through the town, leaving it to its fate.
Posted by Ross Mac rmacfa@gmail.com at 6:56 AM