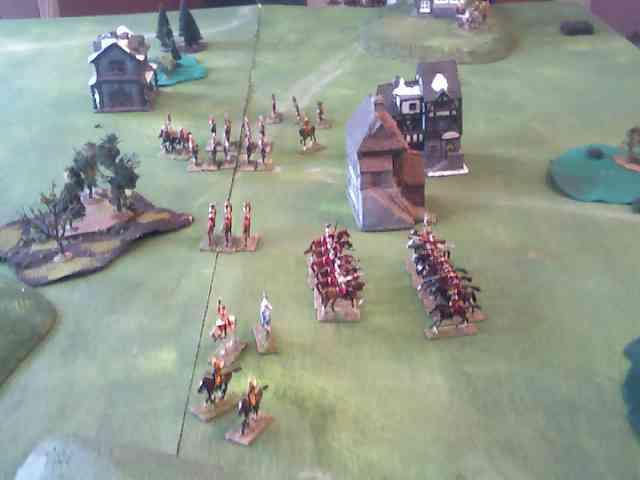 The game began with the Moravian Hussars supported by Saxon Dragoons hotly pursuing Saxe's Lancers across the plain. The Russo-Saxon's won the initiative and charged. The lancers had 2 choices, evade or turn and fight, comparing the Hussar's movement dice to the gap between them, they needed to roll an 8 on 2 dice to escape so they risked the 50% chance to turn and form line. It turned out to be a poor choice as the Hussars hit them stationary and broke them. At the end of the turn the French Heavy Cavalry appeared, 1 to the right of the lancers, 2 to the left, none of them appeared behind the allies.

The allies pulled back swiftly next turn and it looked like they might escape almost unscathed but then fickle luck smiled on the French, they seized the initiative and rolled well for movement, the Orleans regiment deployed into line and headed straight for the enemy with Fitzjames moving to support them while the Colonel General Regiment sped past the town to cut them off. The Saxons choked on their movement and were now within 9" of the enemy so could only retire at 1/2 speed. On the next turn, the initiative switched back but the pincers were closing and there was no way to ride out without a fight. The Saxons deployed 3 troops to face the Colonel General while 2 moved to form a reserve for the Hussars. Orleans spurred forward and were met by the hussars led by their Brigadier. Carnage was heavy but the melee was drawn.

There was now hope that they could disengage but the initiative shifted again and in the ensuing melee, the French heavy cavalry cut up the hussars and sent the remnants fleeing. The Saxons braced themselves but having inflicted nearly 40% casualties on the enemy, the Chevalier reigned in his men and rode to the inn calling for wine.
Posted by Ross Mac rmacfa@gmail.com at 7:38 AM

Email ThisBlogThis!Share to TwitterShare to FacebookShare to Pinterest
Labels: NQSYW