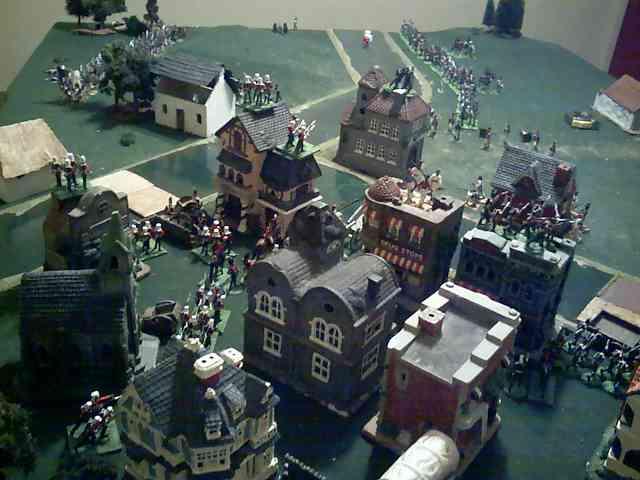 Since there is a Victorian look to most of the buildings I have, the mid-19thC seemed appropriate so it's off to the town of Wye on the edge of the Origawn Territory. The Red Queen's forces consisted of 2 brigades, one with 2 battalions of regular infantry, a battalion of riflemen and a field gun, the other with a battalion of incorporated militia, a battalion of volunteers raised largely from sailors, and a field gun. The scenario allows for 3 mines, one on a bridge, I meant to dice for their location but despite fielding an Engineer Officer, I forgot about the mines in the heat of battle!

The game began with a brisk push up either bank of the river which resulted in various detachments of riflemen and sailors being evicted from the houses on the north shore after a short fight. Blue deployed their artillery to fire across the river then proceeded to throw column after column over the bridges. For a while it looked like the task was impossible but then the Blue Guards were brought forward and crashing into the militia, sent them reeling. In short order the guards had cleared the western quarter.

On the eastern side, a prolonged barrage backed by sharpshooting from the riflemen finally weakened the red infantry enough to allow Brigadier Scott to lead a successful charge over the East bridge while the tattered remains of the sailor's battery at Central Bridge were simultaneously over run. Red's forces fell back and regrouped by the church as a messy street fight developed. Casualties had been high but Red refused to give in and eventually Blue's units started streaming back in disorder, refusing to rally and renew their charges and even the remains of the Blue Guard were wavering when Scott was struck down trying to lead the remnants of the 4th Infantry in one last charge. It was too much and General Ross reluctantly ordered a retreat.
Posted by Ross Mac rmacfa@gmail.com at 3:46 PM