This game was played using 40mm AWI figures and Hearts of Tin by George, Gary & Martin vs Lawrence, Jerry and myself. 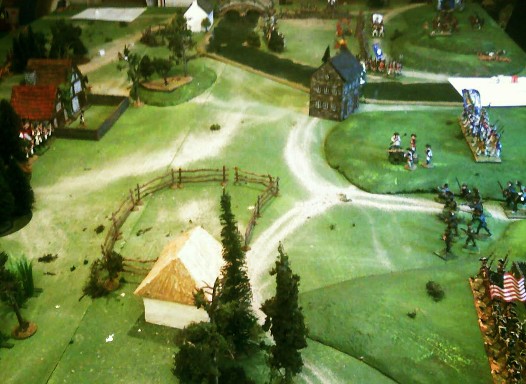 I decided to take the suggestion and fight this as a 2 part game, the patrols and then the ensuing fight.

The Americans (5 continentals, 2 militia, 1 rifles and 2 guns) were laid out on along the hill line then replaced by cards with an equal number of dummy cards. The stationary outposts (1 company each) were marked with a clump of lichen and the moving patrols put on the table and forced to move full along their designated paths.

The British then deployed their patrols 1 company each of Mohawks, Rangers and Light Infantry. These had to dice each turn for deviation unless following a terrain feature such as the river. They were allowed a slight chance to detect but not identify the enemy at 12", a better chance to identify at 6" and automatically found them at 2" (melee range).

On the British left the Mohawks snuck by the patrols, identified some artillery and continentals and then stumbled into a sleeping militia battalion. After a confused exchange of shots they slipped back into the gloom. On the right the light infantry got into a fight with a patrol of riflemen soon reinforced and were eventually driven off. In the center  the rangers slipped past all patrols and mapped out the center of the US position. At this point, with 9 of 10 units spotted the game was ended and the British given the option of a night attack or an assault at 1st light. Having had enough stumbling they waited for dawn while the rebels were put back into their positions and the outposts recalled at dawn.

In a surprise move, the British pushed their artillery and regulars (2 grenadier battalions, inc 1 Hessian and 2 line regiments through the defile between the woods and farm and assault the rebel left, screened by Canadians, Indians and Loyalist rangers on either flank. It was a near run thing as the Rebels rushed troops from the center but at the end of the day the assault was repulsed.

Over the years this pseudo-campaign has straggled on the score was now:  Nova Scotia Rebels 5 British 0.
Posted by Ross Mac rmacfa@gmail.com at 7:26 AM

Email ThisBlogThis!Share to TwitterShare to FacebookShare to Pinterest
Labels: AWI