This game was played between myself and Gary McMahon using my 40mm 16thC English and Scots and Rough Wooing. 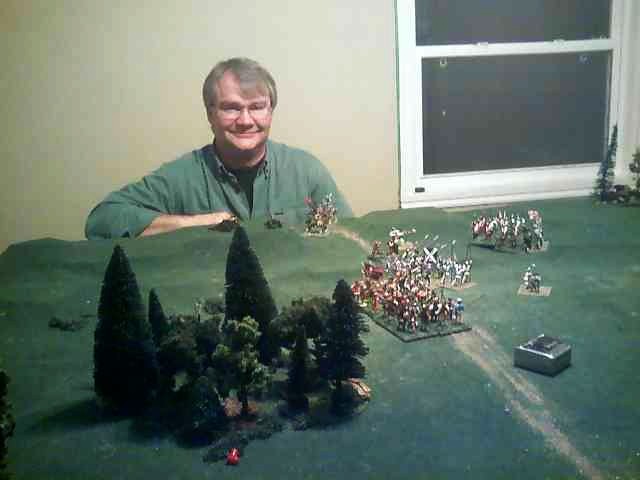 The English under the Earl of Bedford (aka Gary McMahon) arrayed themselves with archers and artillery spread across the centre of the ridge line and the billmen clumped behind the crest on the left of their line. (3 inf +1 lt inf + 1 arty translated into 2 Battles each of 4 bills, 4 bows and 1 gun ( 1 company of bows being replaced by a company of arquebusiers)

The Scots under the Earl of Lennox (aka me) marched on along the road. 6 inf, 2 lt inf, 1 cav and 1 arty being translated as follows: Lord Home's 4 companies of border horse leading followed by the Campbell with 6 companies of highlanders, then the Earl with 6 Scots pike and 2 arquebusier and finally the Rhinegrave with 8 Landsknecht pike and 2 arquebusiers and 2 light guns all in French pay.

Lord Home advanced on the hill but was twice driven back by bow and cannon fire, finally succeeding in working around the English left. The Highlanders then deployed and stormed the hill. Lightly armoured, they fell in heaps under the arrow storm but enough of the chieftain's household remained to sweep away the archers and over run the guns before collecting their wounded (and spoils) and returning to camp. At this point, the Earl of Bedford led his sturdy billmen over the ridge. Lennox deployed his pikemen to face them while his arquebusiers skirmished forward. Evening was drawing nigh (Turn 9 of 12) and the English had high hopes of holding till dark but outnumbered 2 to 1 with their archers scattered, the English foot faded away into the shadow of the woods.
Posted by Ross Mac rmacfa@gmail.com at 4:06 PM