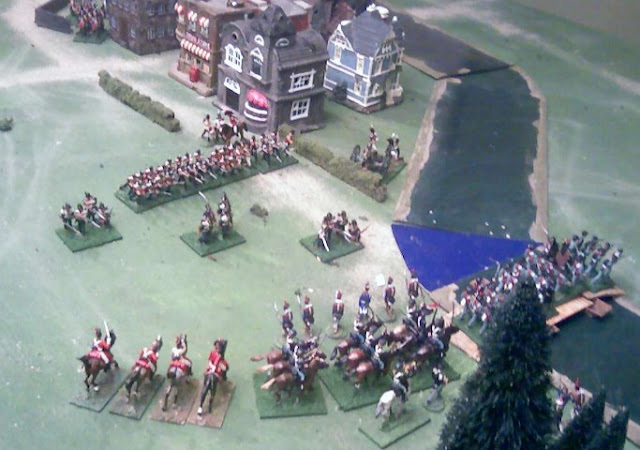 I rather thought the timeframes and movement rates might be a problem with my rules but I was tired and ..... anyway I decided to push on as written. The Oberhilse force consisted of the 1st Dragoons, Paipur Tigers, Frontier Light Horse, 1st Infantry and a handful of skirmishers. Each bridge was held by a company of the Green Tigers while the rest of the tigers, fencibles and Buffs supported by Lancers and a battery of foot artillery held the town.
The skirmishers had crept into the wood by the eastern bridge and opened a heavy fire on the bridge guard while the 1st Infantry rushed across the table in column. The cavalry followed behind them, keeping a wary eye on the town but by the time the gun was manned and turned about and the garrison turned out, the bridge had been over run. A few stray shots followed as the raiders rode off having lost a single company of light cavalry to enemy fire
Posted by Ross Mac rmacfa@gmail.com at 10:57 AM