This game was played with Ron Porter using his 1/72nd WWII figures and Blitzkrieg Commander.

Ron took charge of the German defences, 9 infantry, 2 MG's, 2 mortars,2 HQ, a FAO with 2 offtable guns (big ones I think), a CO, a pillbox and acres of mines and wire, well maybe not that much. I took the rather green Yanks the 1st wave had 9 infantry (Able, Baker & Charlie companies), 2 mg's, 2 mortars, 2 engineers, 2 Lee tanks, 2 incompetent HQ's and an energetic CO who had to rush up and down kicking butts and hauling guys off the beach all game. Oh yes there were also 2 lovely HUGE naval guns with lots of assets which I pretty much wasted. The 2nd wave which waited until turn 5 was the same but only 1 HQ plus a naval FAO. The brown hill on the left rear was designated a minor objective and the bridge in the right rear as a major one. My too clever plan was to concentrate on my left and swing around the wood hopefully bypassing most of Ron's defences.

Well, even if Ron's artillery and the MG in the stone house, where his FAO also was, hadn't destroyed Able and most of Baker companies as well as both MG's, I was having trouble even reaching the hill, my guys kept taking smoke breaks once the CO became preoccupied with the 2nd wave. Since the 2nd wave was late, I redirected it to the opposite flank for the direct run. I lost more boats on the way in including 1 tank and the whole battalion stalled on the water's edge. 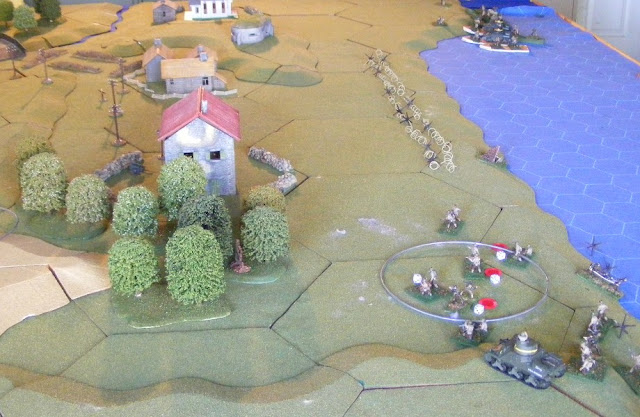 My CO had to make the dash across the width of the beach to get them moving. But, with an observer, the naval guns were useful and weakened the pillbox (small bunker) enough that the Lee was able to take it out with a few well placed shots and the way was open for the remnants of Dog, Easy and Fox to advance on the next stronghold .That was pretty much the high point of the game for the Yanks. They were fast approaching their breakpoint but not the objectives and time was well up.
Posted by Ross Mac rmacfa@gmail.com at 11:12 AM