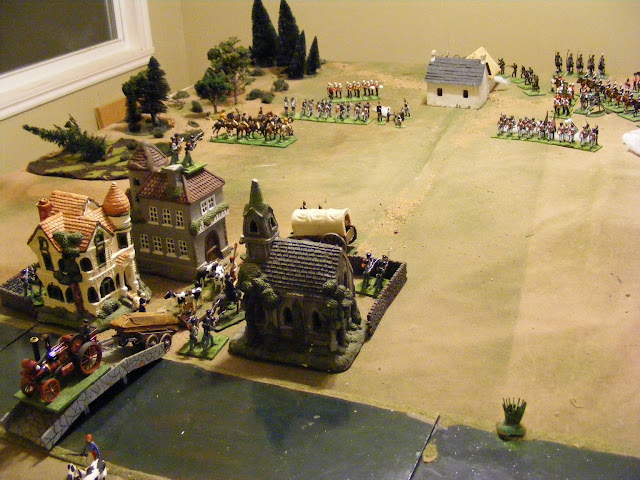 I wanted to play this on my 6'x8' table but life interfered so I squeezed it onto my temporary 5'x6' table.
The battle began well enough for Blue, the 1st infantry coolly forming square to repulse a cavalry attack then deploying into line unleashing some deadly volleys into the Buffs. As Red continued to build up their forces, they could make no headway, even their rockets doing more damage to friends than the enemy.

Behind the lines, the evacuation began smoothly and the engineers began work on a redoubt but as the new steam tractor puffed over the bridge, it hit a rut and threatened to roll over. Four turns passed before the bridge could be cleared. By this time the pressure was building on Blue's front line and it started to withdraw but too late! The rocket battery finally found the range just as the Queen's Rifles cleared the village and opened up on the 1st Infantry. As they staggered from the sudden heavy casualties the Bodyguard charged in and the line broke. Pursuing through, the Bodyguard crashed into the newly raised Frontier Horse but wielding their rifles from the saddle these fought them to a stand still. There was no room for these bold horsemen to retreat to so a swirling melee ended in their annihilation as a fighting unit. Covered by the Frontier Horse, the remnants of Blue's advance guard pulled back closely pursued by Red's infantry.

The engineers in town finished a fine redoubt then belatedly remembered their main purpose. As the light faded, the last wagons cleared the bridge followed by a handful of stragglers, a few light infantry, 1/2 a battery and a couple of battered companies of infantry as the remnants of the 3rd Infantry rallied in the streets and prepared to try and hold back one more charge to give them time to get away. Behind them, the engineers cleared the bridge and lit the fuse. A massive explosion threw up clouds of dust and shook the bridge but when it all settled, the bridge still stood.
Posted by Ross Mac rmacfa@gmail.com at 7:51 AM