This mini-campaign was played by email by 2 friends with Faraway (Red) vs Oberhilse (Blue) (Those referring to the book will see that I have, as often, reversed the roles of red & blue to match the armies being used.. Since no major battles took place, I've decided to display a copy of the map that was used. Red's copy was missing a few minor features. Not every movement is shown on the map and these are broad stroke interpretations but its probably too busy as is. The stars indicate significant clashes, the arrows indicate general movement. The broad bars indicate positions where troops halted for a substantial period, in many cases, where they ended the mini-campaign. 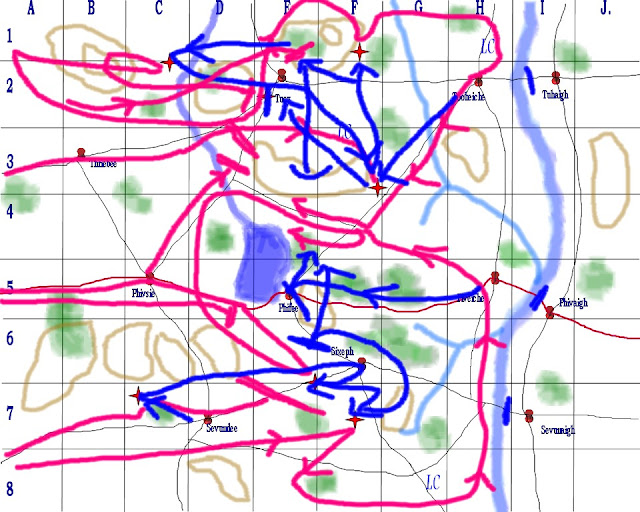 General Legge advanced on a wide front. General Porter's cavalry clashed fairly far forward and actually rode down some over bold light infantry in the north but soon he had been driven back onto the towns of Tuey (2e) & Phivee (5e). In the north Red managed to slip a light cavalry unit past Blue's outposts. It is part of the fun of GM'ing such an affair that I could compare orders and see the LC being sent precisely in the one direction where they could not avoid contacting an advancing Blue brigade as pursuing Blue cavalry came up behind them. I rolled some dice to see if they perceived the trap in time and then rolled some more for the results in case they could slip away with minor harm but alas only a few stragglers reported back and that several days later, meantime they just disappeared leaving Gen Legge to ponder their fate. He seems to have pondered accurately and Larsen's Lancers unit were ordered farther north. They clashed  with the Frontier Light Horse but disengaged and Porter's cavalry turned West to chase off the King's Hussars, not North or East, leaving the lancers to reach the river and recce south along it, back through Tuaiche (2h) and then south west to RV with  reinforcements. Meanwhile there was a feeble attempt to storm Tuey which was forestalled by Blue reinforcements and both sides settled down to watch each other. In the south the Blue Dragoons clashed 3 times with enemy cavalry but failed to stop 2 regiments of light cavalry from slipping away to the south and along to the river where they rode north and joined with Larsen's. The DG Bodyguard, after their own clash with the dragoons, rode north around the lake and through a hole in Blue's lines, they met up with the light cavalry and escorted them back. South of the lake both sides also sat and glared at each other,   neither side strong enough to attack. Sudden;y, at the last minute General Porter realized what was happening and ordered a rapid attempt to cut off the enemy cavalry and destroy them. 12 hours too late, the San Carlos Volunteers were in time to snipe at the DG Bodyguard and the Dragoons chased a few rearguard patrols but the rest of the rece forces retired.


So what had they found out? They had travelled  almost every road and found all of the ones not marked on their map and they scouted the river and all 3 bridges, they also had a very good idea of the forces and location of Blue in the forward area but had not been in enough strength to force the main bridge guards to show their hand so Gen Legge knows how to get to the river but only identified about 1/2 of the defending force.
Posted by Ross Mac rmacfa@gmail.com at 4:51 PM