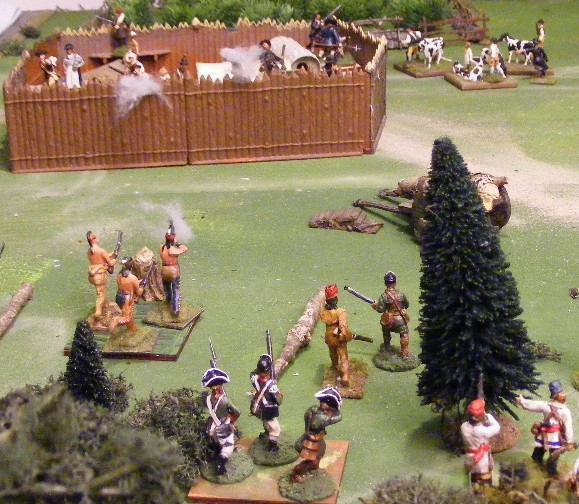 Here was another scenario crying out for single figures and skirmish rules, and I actually had both, I just didn't feel like using them. So, I just doubled the shooting ranges in HofT and declared each base to be an average of 25 men, women children or cows which gave me: 1 unit of rifle armed frontier scouts (veteran), 3 herds of cattle, 5 stands of armed civilians with the "wimmenfolk' loading for their men. I also added a hospital run by a suitable matron assisted by a young lad with bucket. So a settlement of some 150 souls, attacked by a 9 stand raiding party of 150 Indians and 75 Butler's Rangers (veteran militia) . The raiders were out to capture the stockade and destroy all supplies and spoil the harvest.

The settlement was alert and spotted the raiders when they were barely on the table (flock of crows? stray dog?). The Reverend Black had to sortie forth to urge the cattle and field workers in but the sound of musket fire seemed to spur them on and eventually the cattle and people were all in and the gate slammed shut.

The fire was hot and heavy with a surprising number of 6's and before long the riflemen were all down to the hospital cabin being patched up. A rush by rangers and indians, clambering up on each other's shoulders, almost took the empty stockade wall but the Reverend led a a group of anxious settlers forward and in a brief scuttle, drove them back. More musket fire pounded the walls and soon settlers were streaming down to the infirmary  Eventually a makeshift company of wounded frontiersmen and settlers made its way back up onto the wall.

Another rush at the wall saw Michael Butler stretched out momentarily by a blow to the head. More musket fire followed as the indians and rangers wavered but soon Butler was back on his feet and covered by a fierce fire led yet another rush which drove back the riflemen. Then disaster struck the setttlers, in the confusion on the wall the Reverend found himself surrounded by rangers and recognized by a Tory ranger who was once a neighbor, and taken prisoner. As the raiders started to pour over the thinly manned stockade, casualties amongst the defenders grew and suddenly Farmer Brown had had enough, grabbing his wife and daughter he ran for the gate, moments later the whole settlement was fleeing in terror covered by the last few riflemen. By dawn there was nothing left but a smoking ruin as the raiders melted into the forest.
Posted by Ross Mac rmacfa@gmail.com at 11:49 AM

Email ThisBlogThis!Share to TwitterShare to FacebookShare to Pinterest
Labels: AWI