This game was played by the 2 Jefferies Bickle and myself using my 40mm Elastolin Prince Valiant figures and Medieval Mayhem. 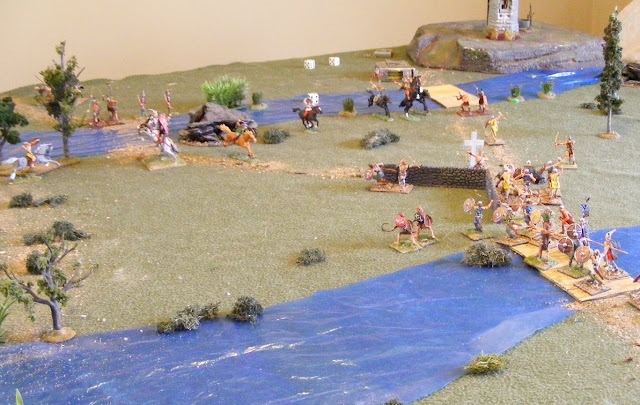 Scenarios 20 & 21 were played on the same day with Jeff taking the role of the Saxon warlord Helgin with his Pictish allies and his son Jeffery playing the role of Duke Stephen of Fulford in the 1st game and then, since Duke Stephen was recovering from serious wounds, Brave Sir Jeffery in the 2nd game. Naturally, I took the role of Prince Michael of Valdur. I had accidentally left my copy of the scenario book, most of the intended scenery and some non-military characters behind in the country so had to improvise with what I had and my memory.

The first game was setup with a border outpost overlooking crossing over the Malagorm River on the edge of Count Hubert's domain. When the vedette spotted a party of Pictish raiders emerging from the woods, they blew their horn as an alarm and closed up to deny the enemy the bridge. Initially they were successful but were overcome before the rest of the garrison could reach them. The young patrician in charge of the garrison had forgotten his shield in the confusion and when an arrow pierced him, the garrison scattered back. Luckily Duke Stephen, alerted by smoke from the beacon was at hand with more foot soldiers followed soon after by a patrol of mercenary Alans.

By now the raiding force had grown as Saxons and Picts came howling out of the woods. Arrows and javelins flew thick and blows were exchanges but Duke Stephen's men held one bridge and Prince Michael with a small handful of men the other. Alas a Pictish arrow slipped past the Duke's shield and found a weak point in his armour. Falling from his white horse, his men grabbed the body and dragged him to safety, abandoning the bridge. Prince Michael could do nothing but cover his wounded uncle's retreat.
Posted by Ross Mac rmacfa@gmail.com at 3:05 PM