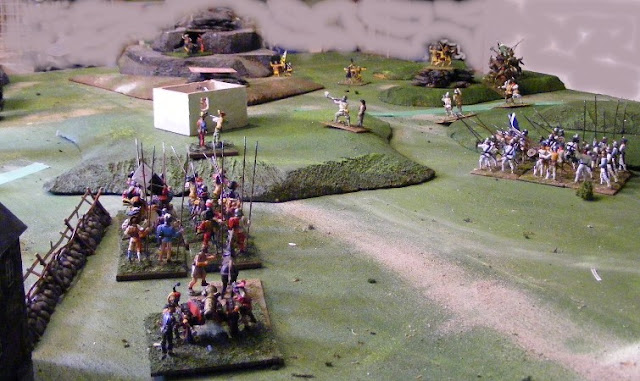 The Duke of Argyle's political scheming had gone too far and he had to gather his Campbell clansmen around him and retreat to the traditional cave in the Highlands (center background behind the gun), pursued by the forces of the Regent. To provide some element of surprise and uncertainly, I deployed the 5 Campbell companies by shuffling 5 cards and 5 blanks and deploying them into various hiding places, then did the same with the Duke and artillery. The cards moved like actual units until seen in the open or until an enemy came within 3" at which point the card was flipped over and replaced by the unit or removed. The Regent deployed Lord Home and 2 Border Horse on the right followed by the Regent's Battle with 6 pike and 3 shot. On the left were German mercenaries provided by the French King to fight the English. (oops) 6 pike, 3 shot and a light gun.

The Germans advanced and stormed a stone farmhouse only to find it empty. They pushed some shot forward but the cautious Captain Duhn stopped several times and the right wing was heavily engaged by the time they finally proved that no highlanders were on their flank at all and turned to the center.

On the right, the Borderers rode forward scouting out various bits of cover and chasing a few outlying Highlanders back. One company got a bit carried away and charged into some clansmen in the open but were hit by the first effective fire of the game and after a prolonged struggle were chopped apart by superior numbers of fierce clansmen. Home led the rest of the borderers forward and rode over the unfortunate highlanders who had made the mistake of trying to run to cover. 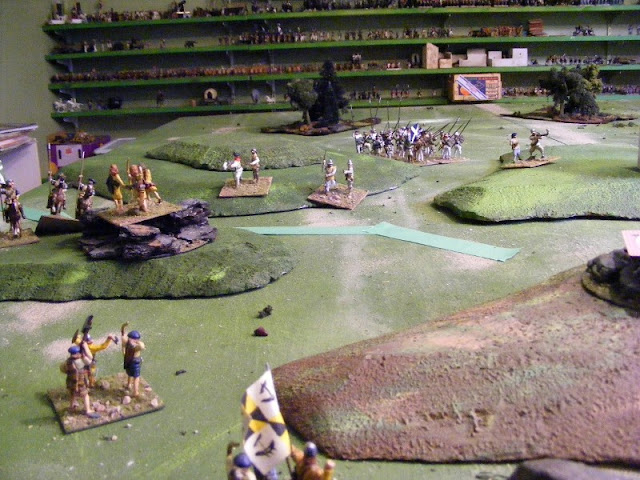 The battle on this flank then settled into prolonged sniping between Highlanders in cover backed by a light gun and the Regent's arquebusiers support by the cavalry. Eventually the remaining Regent's men pulled back while Home, his command reduced to his own personal bodyguard, spurred forward and almost cut down the Duke in hand to hand combat before falling himself. In the center, charge after charge on the white cottage was repulsed until finally the Germans added their weight to the attack. The Regent's men suffered heavy casualties but as the Highland casualties grew, parties of clansmen started slipping away until only the Duke and his bodyguard were left. These stood bravely until a German arquebusier found his mark then the wounded Duke was carried to safety in the mist covered hills.
Posted by Ross Mac rmacfa@gmail.com at 11:22 AM